As an important symbol of Chinese civilization, the Grand Canal connects a north-south economic zone and cultural tie, carrying and witnessing the inheritance and innovation of Chinese civilization. As the cradle that gave birth to the Grand Canal, Jiangsu has the longest history of being nourished by the canal. In the long-term historical accumulation, with its specific geographical, human environment and beauties of literature, it links Wu culture, Huaiyang culture, Chuhan culture and Jianghai culture, giving birth to a brilliant Jiangsu in Chinese culture. The 8 cities along the Jiangsu section of the Grand Canal have formed a unified and distinctive canal culture under the nourishment of the Grand Canal.

In order to better show the Dutch people the “flowing culture” , relying on the cultural resources of the canal and telling the Jiangsu story of the Grand Canal culture, the China Cultural Center in The Hague, in collaboration with Artall Cultural Group have joined hands with the museums (institutes) in Suzhou, Wuxi and Changzhou, Zhenjiang, Yangzhou, Huai’an, Suqian, Lianyungang, etc., to have launched a series of online exhibitions of "Collection of Culture on the Canal", closely focusing on the canal culture and the characteristics of the cities along the canal, using cultural relics to describe the impact of canal excavation on population migration, economic and trade exchanges, scientific and technological exchanges, religious dissemination, production and lifestyle, culture and art, and showing the development characteristics and urban civilization of the Grand Canal in various periods. It is a multi-angle and multi-side visual display of the beautiful life that the Grand Canal brings to the residents of the cities along the coast, and a comprehensive interpretation of the historical stories and splendid civilization carried by the canal.

The Grand Canal passed through the city of Wuxi, creating a splendid industrial and commercial culture. As early as the Ming and Qing Dynasties, Wuxi was the famous cloth dock and silk market in the country at that time, and it was one of the four rice markets in the country.The canal water transport promoted the formation and development of Wuxi Rice City, and to a large extent promoted the development of the town and the prosperity of the regional economy and society.Relying on the transportation convenience brought by the canal, in the first half of the 20th century, a number of factories and enterprises of national capital rose and developed in Wuxi, which became the birthplace of modern national industry and commerce.

It was made in 1788 and faithfully depicts the lake and mountains around the Furong Lake outside the West Gate of Wuxi in the middle of the Qing Dynasty. The scenic spots involved include Huangbutun, Xishan Temple, Huishan Temple, Longguang Pagoda and so on.In the picture, the mist is vast, the clouds are steaming, and the emerald trees in the mountains and the thin willows by the lake cover each other, showing the bright spring of the beautiful south of the Yangtze River.With superb realistic skills, Qin Yi condensed dozens of miles of scenery into the silk, and according to the changes of the scene and layout on the spot, he inserted many scenes of character activities, such as the fisherman's opening the net, the crowd fighting for the crossing, dialogue in the shade of the willows, resting by the lake, and leaning on a railing to overlook, etc., making the picture richer in life.All of theseare arranged in a patchwork manner, echoing the natural scenery.

This hair embroidery work was produced in 1993 by Zhao Hongyu, a Chinese master of arts and crafts from Wuxi. Based on the local conditions and customs on both sides of the ancient canal in the late Qing Dynasty and the early Republic of China, it reproduces the prosperous scene of Wuxi after it developed into an industrial and commercial city by using canal traffic. Nearly 20 landscapes including the "Huangbutun Dragon Boat Race", "Sanliqiao Rice City", and "Huishan Temple" are displayed in a continuous manner. Thousands of people are crowded, with compact structure and magnificent momentum.

This picture depicts the scenery along the ancient canal in Wuxi before the Anti-Japanese War. The picture is beautiful and lined with sails, which organically combines the tranquility of the wild environment with the noisy coastal markets. The color of the whole picture is clear and beautiful. 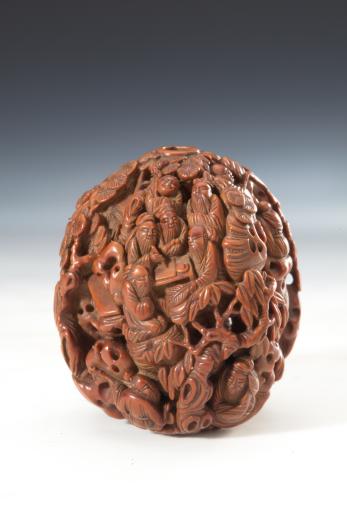 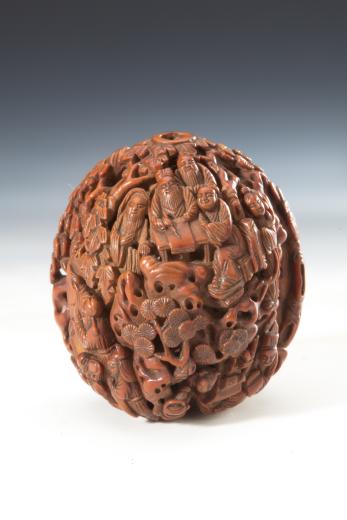 A national first-class cultural relic, the pit is oval, with a long diameter of 3.3 cm and a short diameter of 3.1 cm. The whole body is ochre and rosy, with round holes that can be threaded and hung.The famous Northern Song literati event "Xiyuan gathering" was selected as the theme, according to Mi Fu's "The description of the picture of xiyuan gathering" , the garden landscape layout and figures, ingeniously laid out in accordance with the ups and downs of the pit shape.The ridges on the left and right sides of the pit are carved into trees, flowers and leaves, forming two hemispherical pictures. The pictures are carved with mountains, rocks, pine and cypresses. Between the mountains, rocks and forests, three groups of figures are cleverly arranged to represent the poetry, painting, the scenes such as stone inscriptions, chanting and lectures. The profound and secluded landscape of the garden with the vivid character activities are fully demonstrate the quiet and clear world of wonderland that the literatis of the Northern Song Dynasty yearn for.

In terms of carving techniques, the author used inset carving, round carving, open carving, relief carving and other techniques to depict 19 people and activity scenes between square inches. Although the figures of the forest and stone are small, they are meticulously carved, successfully showing the exquisite and refined lake stones and the ancient trees. The branches are flexed and stretched, the pine stems are scarred and the pine needles are fine and dense. The characters are refined, and the lines are smooth, especially the delicate facial depiction of the characters, the expression is lifelike, showing the author's extraordinary artistic attainments. 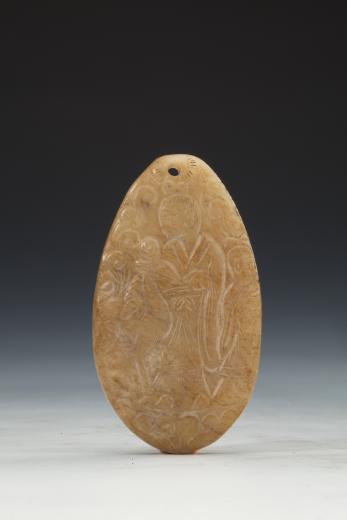 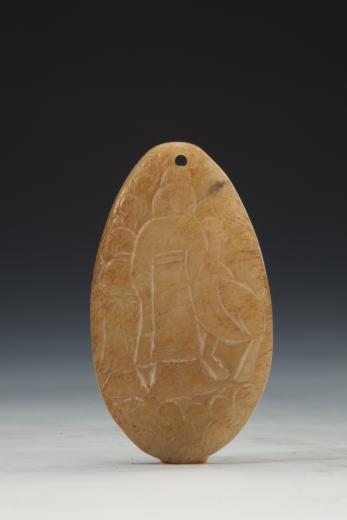 It is national first-class cultural relics, included in the "Collection of Chinese Jade Articles". The jade pendant is oval in shape, with a slightly narrow upper part and a slightly wider lower part. It is blue-white jade with waxy luster. The body is covered with cow hair patterns, and the color is like sweet chestnut, showing that the color has penetrated into it, and it is full of ancient meaning. It cannot be formed unless it has a thousand years of history. The design of this jade pendant is quite delicate. From the front, there is one person in the center, with flat eyebrows, thin eyes, flat nose, big ears, neat and fine hair, and a crown of hair, which are typical facial features of Han people. This person is wearing a wide-sleeved high-necked shirt, a waistband, and a cloud-headed shoe. His right hand strokes the back of the deer next to him, and his left index finger points to the deer's mouth. The deer's head has a big horn, a fat body, bulging and strong muscles, long slender legs, an upturned deer tail, and a forward-leaning mouth, as if to stick out the tongue to lick the owner's fingers. A child with a double-up hair bun is at right, wearing a wide-sleeved turtleneck, a waistband, and holding a bowl in his hand. His expression is respectful and childish. Viewed from the back, it is a back in the shape of a person and a deer. One of the front legs of the deer is bent and slightly raised, and the child's belt is tied behind him.

The detail carvings of sapphire decoration are very characteristic of the times. No matter the front or back, the costumes of the characters use slightly curved shallow and thin oblique engraved lines to express the creases. These lines are long and numerous, which are typical features of the costumes depicted in the Tang Dynasty. The carving technique of deer also has obvious characteristics of the Tang Dynasty. The upper and lower eyeliners of the deer's eyes are carved with two times, and the blades can be seen. The carved lines are thick at one end and thin at the other, and the eyes are represented by a short shade line. This is a common method of depicting animals in the Tang Dynasty. The Tang Dynasty was an extremely important transition period for jade culture, and realized the transformation from "li jade" and "zang jade" to practical jade and religious jade. In the Tang Dynasty, the nobles carried jade with them to show their demeanor.

This sapphire decoration was unearthed in 1976 in the tomb of Gu Lin of Ming Dynasty in Dengwanli, Yangming in Wuxi. Gu Lin was born in 1557, Jiajing, Ming Dynasty, and died in 1595, with the name Yu Qing, a Ming Tai student. Gu Lin’s tomb, commonly known as "Gu Da Tomb," was once shoveled for historical reasons. It was discovered again in an accidental infrastructure project in March 1976. The Wuxi Museum at that time carried out a rescue cleanup. 35 burial objects (sets) were unearthed, including 10 jade wares from the Han Dynasty to the Ming Dynasty. The craftsmanship of each piece is excellent, which shows the deep affection to jade of the tomb owner.

06. High-foot gold cup with a pattern of a boy surrounded by lotus 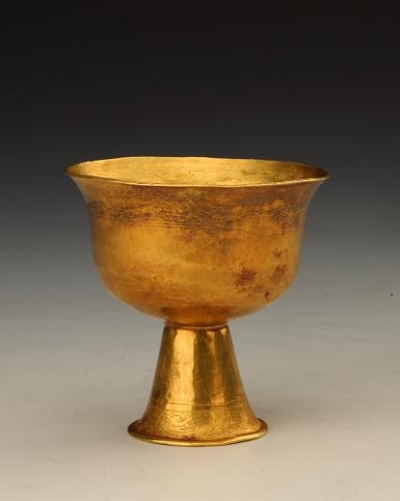 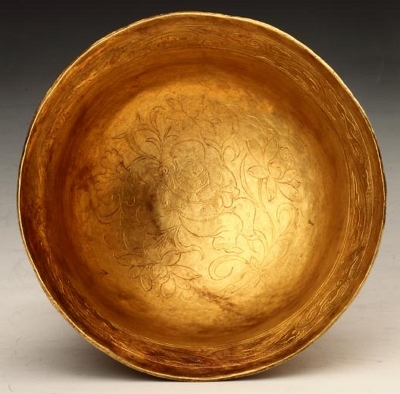 High-foot gold cup with a pattern of a boy surrounded by lotus
Height 8.6 cm, caliber 8.6 cm, foot diameter 4.6 cm
Unearthed from the tomb of Qian Yu and his wife in Yuan Dynasty at Yaogeli, Southern Suburb of Wuxi Museum

A national first-class cultural relic, this high-foot gold cup is still golden after thousands of years, rich and luxurious, but also lively and lovely. The cup has a big opening, a round bottom and high ring feet. The cup body and the ring feet are connected by welding, and the shape is light and beautiful. A circle of curling moire patterns are engraved on the inner side of the opening and the bottom of the circle. The center of the cup is carved with a fine and smooth shade line, engraved with a very exquisite "Boysurrounded by lotus" pattern. A boy dressed in a short shirt with narrow sleeves and a cross-necked collar, holding a folded lotus in his hand, playing around, surrounded by lotus.The boy has a beautiful face, lively and lovely, in a typical Song Dynasty style. Therefore, it is very rare, and it has high historical value for the research of gold and silversmiths at that time.

This cup was unearthed in the tomb of Qian Yu and his wife of Yuan Dynasty in Yaogeli, southern suburb of Wuxi in 1960.Qian Yu (1247-1320), styled Kuanfu, a native of Wuxi, was a descendant of Qianyu King of Wuyue in the Five Dynasties and Ten Kingdoms period. He was a wealthy family in Wuxi during the Yuan Dynasty and was buried in the first year of 1321.The burial objects of Qian Yu’s tomb are very rich, including gold, silver, jade, crystal, agate, amber, silk clothing, lacquer, banknotes, wood, and bronze mirrors， which are full of arts and crafts value.

The earliest tall cups, so far, is appeared in the Northern and Southern Dynasties, prevailed in the Yuan Dynasty, and are mostly seen in porcelain. The "History of Chinese Ceramics" states that “the goblet is the most popular form of porcelain in the Yuan Dynasty”. This high-foot gold cup should be a drinking vessel like a porcelain cup of the same shape, which has practical value.

"Boysurrounded by lotus" is a traditional auspicious pattern in ancient China, generally composed of lotus, sheng virtuoso and boy. It means to give birth to lively and lovely sons continuously, and entrust people's good wishes for life.